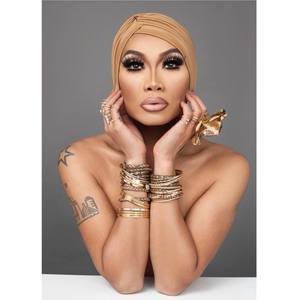 Join Jujubee as she covers her favorite songs and shares intimate & funny stories from her life traveling the world.

Jujubee is most known for her involvement in RuPaul’s Drag Race Season 2. Her constant passion for the art of Drag carried her through to become a finalist in the competition; something she wouldn’t change for the world.

Airline is the creator of Jujubee. There was always an undying love for the stage within his heart. Airline auditioned for as many plays and musicals available while in school. He went off to the University of Massachusetts Amherst where he studied Theatre Arts.

Airline’s first experience as Jujubee was unbelievable. Almost 10 years in the business, it’s only the beginning. Soon after Jujubee’s appearance on RuPaul’s Drag Race, she became a professor on RuPaul’s Drag U, modeled for LOGO’s ‘The Arrangement,” walked the runway for Richie Rich during The Mercedes Benz Fashion Week 2011, nominated for ‘Most Addictive Reality Star,’ at The NewNowNext Awards 2010, and appeared in her very first commercial for Absolut Vodka. You can see her next on the second season of Drag U, which will air June 20th.

Each show is 100 notes = $10.00 USD per household
Anyone in the world can buy tickets and watch!
All sales are final, no refunds.

Enjoy drag & LGBT entertainers from the safety of your home, wherever you are in the world!

Audiences are limited for each show to maintain the intimacy and exclusivity, like it would normally be at your local drag show (and yes, you will even be able to make it rain on them). Artists may decide to release additional tickets for their show, but a single show will never exceed more than a few hundred households total.

Each 30-minute show will be a once in a lifetime live experience, which will never be recorded or re-released. Singing, cooking, comedy, lip syncing and drama are just some of the elements that will be showcased in this festival. Tickets will be extremely limited, to keep audience sizes small and the experience intimate, with opportunities to interact with artists, tip them, and potentially be awarded prizes and giveaways. Ticket prices for each show will start at an economical $10.00 USD per household. Shows will be suitable for all ages, though parental discretion is advised. For full show descriptions and tickets go to www.stageit.com/digitaldragfest.