Digital Anxieties: A Conversation with Bo Burnham and Jonny Sun 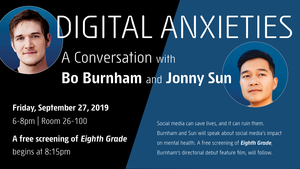 Digital Anxieties: A Conversation with Bo Burnham and Jonny Sun

Launching his career in 2006 after comedy videos he filmed in his childhood bedroom went viral on YouTube, Bo Burnham became a nationally headlining comic and writer while growing up in the social media spotlight. Jonny Sun, a screen and TV writer, author, and MIT Ph.D. candidate who has over 500,000 social media followers, has also weathered the benefits and burdens digital fame brings. Eighth Grade, Burnham’s directorial debut feature film, and Sun’s TED Talk both tackle social media’s impact on mental health and the virtues of being vulnerable. Burnham and Sun head to MIT to discuss the hyperconnected love and loneliness of the Internet and staying healthy in the digital age. Rosalind Picard, founder and director of the MIT Affective Computing Research Group, will open the event. A free screening of Eighth Grade will follow.

Bo Burnham is a comedian, actor, and director whose viral comedy videos have more than 250 million views. He has produced three full-length comedy albums, three stand-up specials, and co-created and starred in the MTV series Zach Stone Is Gonna Be Famous. Eighth Grade, his first feature film as a writer and director, won the Writers Guild of America Award for Original Screenplay, the Directors Guild of America Award for Outstanding Directing on a First-Time Feature Film, and the Independent Spirit Award for Best First Screenplay.

Jonny Sun (stylized as “jomny sun”) is the author and illustrator of everyone’s a aliebn when ur a aliebn too (HarperPerennial, 2017) and the illustrator of Gmorning, Gnight! by Lin-Manuel Miranda (Penguin Random House, 2018). He is currently a writer for the animated series BoJack Horseman. His comedic work has appeared in The New Yorker, TIME Magazine, BuzzFeed, Playboy, GQ, and McSweeney’s.

Rosalind Picard is founder and director of the Affective Computing Research Group at MIT, co-director of the Media Lab’s Advancing Wellbeing Initiative, and faculty chair of MIT’s MindHandHeart Initiative. She co-founded the technology companies Empatica, Inc., which creates wearable sensors and analytics to improve health, and Affectiva, Inc., which delivers technology to help measure and communicate emotion.

All Communications Forum events are free and open to the general public. Seating is given on a first come, first served basis. There are no tickets. This event is co-sponsored by MindHandHeart at MIT, de Florez Fund for Humor, Women & Gender Studies at MIT,Council for the Arts at MIT (CAMIT), the MIT Office of Graduate Education, the MIT Large Event Fund, Active Minds at MIT, FAIL!, SaveTFP, and the MIT Student Activities Office.​