Dietrich Strause & The Blue Ribbons in the Haymarket Lounge 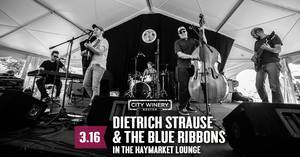 Dietrich Strause’s songs are a mix of timeless melody, literate lyricism, and a "virtuosic command of imagery.” (The Artery, WBUR) Strause released his new album How Cruel That Hunger Binds on August 26th, produced by Zachariah Hickman (Ray LaMontage, Josh Ritter), the next benchmark in his steady evolution as one of the most eclectic writers and performers coming out of New England. His newest collection of songs is found somewhere in the shadows of the likes of Randy Newman, Nick Lowe, and Paul Simon. Strause dropped out of music school, where he was studying classical trumpet, to become a politics major and take up the guitar. But that hasn’t kept him from incorporating his first instrument into the texture of his recordings, or from putting down the guitar to lead his band with just his voice and his trumpet. His last release Little Stones to Break the Giant’s Heart was featured in No Depression, The Bluegrass Situation, CMT’s The Edge, and on Starbucks’ world wide playlist, helping him garner invitations on the road with folk luminaries such as Anais Mitchell, Great Lake Swimmers, and Sarah Jarosz.

The Haymarket Lounge at City Winery Boston is a smaller, club-like space with a full bar, well-suited to blues, acoustic performances, comedy, and more. Seated shows will be general admission (first-come, first-served seating) with table service for food and drinks. Standing room only shows will not have food service, but drinks will be available at the bar.