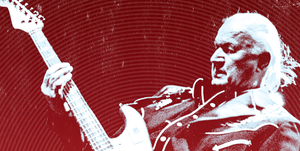 Quentin Tarantino's Pulp Fiction reintroduced the legendary "King of the Surf Guitar," Dick Dale, to modern listeners with his song "Misirlou," used as the film's iconic opening theme. Probably the first guitar shredder, Dale is credited with inventing the classic surf rock sound, which inspired guitarists from Jimi Hendrix to Eddie Van Halen and beyond. Incorporating Eastern musical scales with lightning fast tremolo picking and teaming up with Fender to push the limits of amplification, Dale created the influential playing style heard on tunes like "Let's Go Trippin'," which captures the sounds Dale heard while surfing. More than 60 years since his career began, Dale is still one of the hardest-rocking guitarists in America. Now you can catch one of his electrifying live shows at Middle East Downstairs in Cambridge.