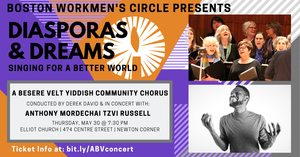 People throughout history have been pushed from their homes by forces beyond their control. As Jews, we have a particular, centuries-old connection with this reality, and we find commonality with the pain and aspirations of all people who find themselves in a diaspora. We sing in support of those who are strangers in a strange land, who long for a fabled ancestral homeland while at the same time wanting to build a promising, normal life for themselves and their family in a new home.

Join us for this one of a kind experience! Get your tickets today!
http://bit.ly/ABVconcert

More about the artists:
A Besere Velt – A Better World – is proud to be a “voice” for justice. This 60-member community chorus of the Boston Workmen's Circle Center for Jewish Culture & Social Justice, conducted by Derek David, weaves the heartache and irrepressible idealism of Yiddish folk music into a vision of justice and humanity for the 21st century. From haunting melodies to workers’ anthems, the songs come alive with multi-layered harmonies. The repertoire of A Besere Velt grew out of the shtetls, the sweatshops and union meetings, the camps and ghettos. These folk songs make the richness of the Eastern European immigrant experience accessible to a generation of non-Yiddish speakers. They contain the sounds of the history, the culture and the progressive values that have influenced generations.