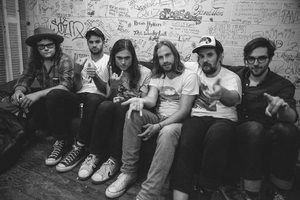 The gravitational pull of Diarrhea Planet is strong; once you get caught in the orbit of its stadium-sized riffs and blistering solos, it’s hard to escape. The Nashville six-piece has been melting faces since its debut 7” Aloha first started making waves outside the leafy campus of Belmont University, where its members first met. What started as a dorm room dick joke between two friends bored by the music-business ladder-climbing of their classmates has grown into one of the biggest—and loudest—rock acts to come out of Nashville since their big bros and labelmates in JEFF The Brotherhood. As they toured the country behind their critically acclaimed 2013 LP I’m Rich Beyond Your Wildest Dreams, the likes of Billboard, Rolling Stone, SPIN, and even BuzzFeed have taken notice. Ignore them at your own peril.

On their latest LP for Infinity Cat Recordings, Turn to Gold, the Planet boys worked with Vance Powell, the Grammy-winning engineer and Jack White confidant. Powell used his expertise in recording live sound to capture some of the energy of the
Diarrhea Planet live experience—they tracked the main guitar and drum tracks live, in the same room, for a record that’s both massive and frenetic. It’s easily the most sophisticated and complex music they’ve ever made, but still carries the joyous irreverence that minted thousands of RAWK fans across the country.

The band’s rhythm section, which features drummer Ian Bush (a.k.a. Tuff Gus) and bassist Mike Boyle, is the bedrock on which the foundation is built, but what makes Diarrhea Planet explode is the raw power of its four guitars. Not one note is wasted, and each ax slinger plays a role; Jordan Smith writes soaring power pop singalong hooks; Brent Toler brings a classic rock sensibility and chunky, fuzzy riffs; Emmett Miller’s wields classical training and a wizard-like five-finger pick-less technique for mind-bending, finger-tapping solos; and Evan Bird is the glue that holds them all together, capable of playing any part (or instrument) as needed.

Diarrhea Planet is a nationally touring band, playing a punishing schedule of more than 200 shows a year. But they cut their teeth in the clubs and house shows of the Nashville DIY scene, built by the likes of JEFF, Heavy Cream, Natural Child, Pujol, and shaped in legendary spaces like the old police precinct that would come to be known as Glenn Danzig’s House. As they’ve graduated from living rooms to clubs to festivals, the energy has remained constant—just ask the ladies in the mosh pit or the crowdsurfing dads you’re sure to find at any Diarrhea Planet show. They’re carrying the torch for the past, present and future of rock, and you’d be wise to take notice—everyone else sure has.