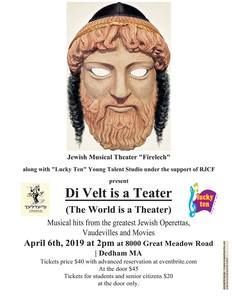 Come be transported back through thousands of years of Jewish history all the way up to cabaret a few decades ago - through the vibrant choreography and touching songs by the the Jewish/Yiddish Musical Theatre - Firelech's - culminating performance!

A "firelech" is a "spark" which describes the Firelech group.

"Firelech" roots come from another Jewish Group with the same name. In Vilnius (Lithuania) in 1971 a group of people organized a Jewish ensemble of music and dance, which was called "Firelech". That ensemble became well known in the former Soviet Union and around the world.

Firelech theatre was born in the states September 2000 when the new founder suggested the idea of a Jewish Musical Theatre to a group of enthusiastic fans of Jewish and Yiddish music. The first performance took place at the JCC in Brighton, MA in November 2000 after two months of rehearsing, next show, called ''Vignettes of life in a Shtetl', took place at the JCC in Newton in May 2001. Different programs were produced over the course of the past 18 years – ‘Once upon a Chanukah”, “Alevai”, “Smile! You Are On!”, “Barry Sisters”, “Di Velt is a Teater”. Tonight you’ll see a new generation of Firelech soloists. We are very proud of them, they keep Firelech traditions alive.

As Firelech performs heartwarming songs in Yiddish and Hebrew alongside magical dancing, you suddenly become a time traveler transported onto the streets of that Shtetl‚ a place where our great-grandparents lived among the Jews of Spain, Greece and Yemen. Eventually you find yourself in the land of Israel, where no matter how many tears are shed and how much pain we as Jews endure, there is always room for song and dance in our hearts.

Our performance is a result of an extensive, two year research into the world of American Yiddish Theater and Movies. From the glory days of the Second Avenue Theater in the nineteen twenties to the animated movies of today, we invite you to take a ride with us through the best of American Jewish Musical traditions. We hope you enjoy the colorful patchwork of performances from Yidl Mitn Fiddle, Mamele, American Tale, Prince of Egypt and more!

Tickets can be purchased in advance or at the door (senior/student discounts included!): https://www.eventbrite.com/e/di-velt-is-a-teater-tickets-54268431339