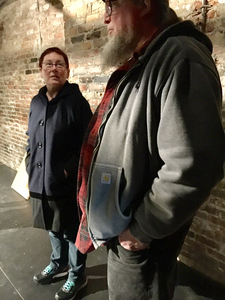 Fort Point Theater Channel (FPTC) celebrates its tenth anniversary with the premiere of Dhalgren Sunrise, a multimedia performance art production, that combines scripted text with elements of improvisation and audience interaction. The script is based on the highly acclaimed science fiction novel Dhalgren, written by Samuel R. Delany, and described by writer William Gibson as "a riddle that was never meant to be solved."

FPTC's co-artistic director Mitchel K. Ahern has adapted this unsolvable riddle for the stage, along with associate producer Vanessa LeFevre. Ahern is also the director, a participating actor, and musician, performing on his self-invented instrument, the harrow, created from a farm implement of the same name. To understand Ahern's investment in the production, he explained how the cast, crew, and musicians are preparing: “We're exploring how to thrive in a time of dystopia, where the normal rules of reality have turned fluid. Through structured improvisation, dancers, musicians, readers, interactive video, and articulated staging engage with the novel's themes of identity, violence, fear, and sexuality.”

Dhalgren Sunrise is comprised of a Prelude and six short acts: Orchid, Moons, Fire, Sex, Scorpions, and Sunrise. Each act, approximately 10 minutes in length, features a brief selection from the 800-page novel -- 300-500 words for each excerpt -- accompanied and interpreted by movement artists, interactive video, articulated stage effects, and improvisational music played on invented instruments. Each act is announced with an oversized letterpress title card that provides grounding in words and images for the manifestations of interpretive action.

Each act is independent, incorporating the dissociative techniques that give the novel such power. Wheeled set pieces slowly move, constantly shifting their relationships to one another, while lighting and video effects simulate the menacing glow of distant fire, as it interacts with the movement artists. The abstract cityscape, constructed in layers, reflects the all-encompassing world of the novel. In the novel and in FPTC's interpretation, certain objects are weighted with a significance that keeps shifting in terms of their identities and allegiances.

Further background on the novelist and FPTC's interpreters of his work:

American author, professor, and literary critic Samuel R. Delany, who was raised in Harlem, has long dealt in issues not usually addressed in the science fiction genre. As a light-skinned black homosexual, he has considered himself as "that most ambiguous of citizens, the writer." In the course of his long career, he has won four Nebula awards, including for his Babel-17 and The Einstein Intersection, and two Hugo awards. His novel Dark Reflections received the Stonewall Book Award. He is also a member of the Science Fiction and Fantasy Hall of Fame. Dhalgren is Delany's eleventh and most popular novel, selling a million-plus copies.
http://www.penguinrandomhouse.com/authors/6807/samuel-r-delany/, http://www.facebook.com/samuelrdelany/

Mitchel K. Ahern, a co-artistic director of FPTC, works in multiple media, including letterpress, performance art, and invented instruments. He has exhibited and performed at many galleries and clubs, including the DeCordova Museum and Sculpture Park, 119 Gallery, Atlantic Works Gallery, Galatea, Marblehead Arts, The Middle East, The Rat, the Knitting Factory, Figment, and the Wonder Valley Festival.
http://www.mitchelka.org, http://www.facebook.com/mitchelka

Further background on Ahern's artistic collaborators for Dhalgren Sunrise, can be found at http://www.fortpointtheatrechannel.org/dahlgren-sunrise/, http://www.facebook.com/events/1687457548214827/.

Fort Point Theatre Channel (FPTC) grows out of Fort Point’s unique, artist-grounded community. In 2007, the first Exclamation Point! marked its start with an evening of new writing by neighborhood artists and friends. Since then, every project has been distinctive, built upon the diverse mix of arts represented by a core group of artistic directors, now numbering about 20. FPTC's home base is in the Fort Point section of the South Boston waterfront, while it produces throughout Boston and elsewhere.

FPTC is dedicated to creating and sustaining new configurations of the performing arts. It brings together an ensemble of artists from the worlds of theater, music, visual arts, and everything in between, as a forum for collaborative expression, while also contributing artistically to their communities.