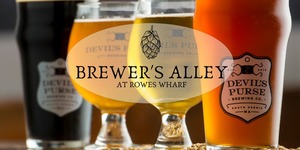 Brewer’s Alley, nestled between the Boston Harbor and Atlantic Avenue, is an all-new outdoor beer garden-inspired seasonal concept at Boston Harbor Hotel that will welcome local breweries for pop-up residencies during the summer. The 2019 summer lineup kicks off on May 23, with Cape Cod-based Devil’s Purse Brewing Co. To introduce their Brewer’s Alley residency, Devil’s Purse Brewing Co. will host a special ticketed kick-off event on May 23, including a complimentary beer and bites for $20 per person.

Following the May 23 kickoff admission to Brewer’s Alley will be complimentary. Devil’s P purse lineup of handcrafted brews will be available at Brewer’s Alley May 23 – June 19. Devil’s Purse Brewing Company will be serving their signature beers including Handline Kolsch, Stonehorse Citra IPA, Middle Ground IPA, and more.

Brewer’s Alley will be open seven days a week, weather permitting. Each brewery will host a ticketed kick off event on the first night of their residency.