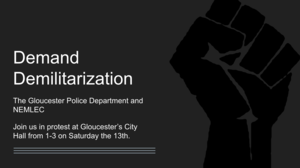 Join us in protest at Gloucester’s City Hall from 1-3 on Saturday the 13th. We call on the Gloucester Police Department, the Police Chief Edward G. Conley who took a knee with protesters at the protest organized by the Youth Peace Movement, the city council, and outspoken supporter of Black Lives Matter, Mayor Sefatia Romeo Theken to set an example for what an accountable, community oriented police force looks like. Demilitarize the police. Discontinue support of the NEMLEC.

Live up to your word.

The records released by the Massachusetts ACLU reveal that NEMLEC SWAT teams were being used primarily to execute low-scale drug arrests, rather than intervene in hostage situations and respond to terrorist threats. As reported in the Washington Post, the use of these SWAT teams is excessive.

As reported in the Lowell Sun, of the 21 drug related warrants that NEMLEC SWAT teams executed within the period of time covered in the released records, only 5 of the police reports mention illegal drugs actually being seized.

NEMLEC SWAT teams also are recorded to have utilized the “no knock” entry method while serving warrants on numerous occasions, the same practice which lead to the police killing of Breonna Taylor in her own home.

The NEMLEC Is funded heavily with dues from municipal police departments. In the Gloucester Police Department’s 2019 budget, it is recorded that $5,550 were paid in dues to NEMLEC, as well as $1,666 for “NEMLEC Assessment IMT Communications Vehicle.”

Both of the instances for SWAT teams being utilized in Gloucester recorded in the 2015 documents were attempts to disarm and hospitalize suicidal individuals. Both individuals were recovered safely.

In one of these instances, three K-9 units are recorded as being present, as well as six long-arm guns and three tasers. In the other instance, the individual threatening suicide was able to be apprehended after being gassed out of his home with eighteen canisters of gas and three flameless gas-grenades. There were seventeen long-arm guns present at this altercation, one police dog, and a Bearcat- a military grade armored personnel carrier. There was only one medic present.