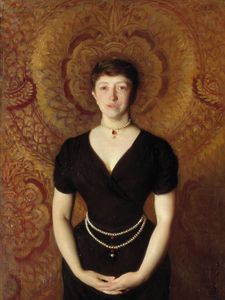 Step back in time and meet Isabella Stewart Gardner, the famed founder of our own Gardner Museum in Boston. Learn about her life, charm, friends and acquaintances, travels, stylish taste and unconventional behavior. An informative, yet entertaining presentation! The cast will open up to the audience for discussion regarding Isabella after the performance.

An edutainment production, written by Fran Baron, the show will feature Fran Baron as Isabella Stewart Gardner and Lynne Moulton as her maid, Lottie.

The event will be in the Commonwealth Salon.

Fran Baron’s most recent roles include Alice Roosevelt and Sara Roosevelt in Truly Eleanor, Maggie in Meet Julia Child! Mrs. Patterson, Martha and Evalyn, in Delvena’s All the President’s Women and Narrator and Mrs. Cratchit in The Christmas Carol. In addition to acting, she is a playwright, producer and theatrical manager.

Lynne Moulton has performed several roles for Delvena Theatre including her IRNE nominated Martha in Who's Afraid of Virginia Woolf? and Sissy in Piece of My Heart and also for numerous other theatre companies in the New England area. She received her acting training at the Royal Academy of Dramatic Art and at Trinity Rep Conservatory.

The Delvena Theatre Company was founded in 1992 and has performed at various venues, most often at the Boston Center for the Arts. The company was nominated for five Independent Reviewers of New England awards. Its production of 'Who's Afraid of Virginia Woolf?' was on Theatre Mirror's Best List for acting, directing and production. Presentations of 'Anna Weiss' and 'Beyond Therapy' were included on Theatre Mirror's best play list and 'Blue Heart' was placed on Aisle Say's best list.