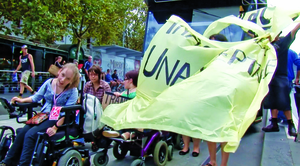 In English with Open Captions and CART

Defiant Lives introduces the world to the most impressive activists you have never heard of and tells the story of the rise and fight of the disability rights movement in the United States, Britain, and Australia. Featuring exclusive interviews with elders who led the movement over the past five decades, the film weaves together never-before-seen archival footage with the personal stories of men and women as they move from being warehoused in institutions to fighting for independence and control over their lives.