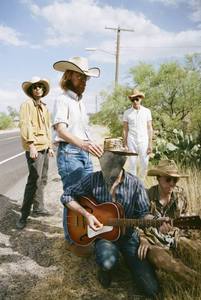 From Atlanta, Georgia, the origins of Deerhunter can be traced back to when frontman Bradford Cox first met guitarist Lockett Pundt at high school. Years later Bradford met Moses Archuleta and started jamming together. Other contributors to Deerhunter since its establishment in 2001 include Josh Fauver, Colin Mee and Whitney Petty. The current incarnation consists of Cox, Pundt and Archuleta plus bassist Josh Mckay and guitarist Frankie Broyles.

Deerhunter’s first album was a lo-fi experiment not initially intended for the wider world, but appeared in 2005 on a local Atlanta label, Stickfigure. Although officially untitled, it has since become known as Turn It Up, Faggot; a phrase that doesn’t actually appear on the sleeve but is an insult that Cox claimed was often thrown at the band during their early gigs. Their next album, Cryptograms (2006), was generally considered to be their real debut and as such things started to get serious for the band. They had moved to fêted Chicago indie, Kranky (Godspeed You! Black Emperor, Low, Stars Of The Lid), and the world outside was starting to pay attention.

Then in mid-2008, Deerhunter and Kranky signed a deal with 4AD, allowing them to finally release music outside the US and the band’s next move was to prove epic in more than just musical terms.?? Recorded over the course of a week at the Rare Book Studios in Brooklyn, NY, the Can and Wire-inspired Microcastle (2008) was to propel them to further heights. However, the album leaked four months before release, leading the band back to the studio to record Weird Era Cont., an album in its own right added as a bonus disc to make Microcastle a 25-track colossus. Not content with such prolificacy, the band announced a new five track EP, Rainwater Cassette Exchange, in 2009 and that its release would coincide with the band’s extensive European, Japanese and Australian tour in May and June.??

Displaying few signs of slowing down, Halcyon Digest, the band’s fourth studio album was released in September 2010. Remaining in their native Georgia to piece together the album, Halcyon Digest took just a few weeks to complete. The recording sessions took place at Chase Park Transduction in Athens with Ben H. Allen helping to co-produce the album, while final track, ‘He Would Have Laughed,’ was recorded separately by Bradford Cox at NOTOWN SOUND in Marietta. To announce the release, the band fully embraced the DIY mindset of their New Wave heroes from the 70’s and 80’s with a Cox-designed, cut-and-paste Xeroxed flyer. It’s with these kind of approaches that Deerhunter continue to widen their sphere of influence and impress with each subsequent release.

After a brief hiatus, during which time Bradford Cox and Lockett Pundt released their own albums as Atlas Sound and Lotus Plaza respectively, a new Deerhunter line-up (with additions of bassist Josh Mckay and guitarist Frankie Broyles) reconvened in January 2013 at Rare Book Studio in Brooklyn, New York. Produced by Nicholas Vernhes and Bradford Cox and recorded in the dead of night, Deerhunter’s new longplayer Monomania will be released in May. Monomania finds the group recalling its scrappy punk aesthetic; a perfect nocturnal garage rock album full of the layered and hazy vintage guitar sounds that define them.

Mary Lattimore is a Los Angeles-based harpist. She experiments with effects through her Lyon and Healy Concert Grand pedal harp, concocting half-structured improvisations which can include both ambient glitter and unsettling noise. Her first solo record, the Withdrawing Room, was released on Desire Path Recordings in 2014. The solo recordings that followed, At the Dam and Collected Pieces, were released by Ghostly International.

Mary has also recorded synth + harp duo projects with Elysse Thebner Miller (And the Birds Flew Overhead) and Jeff Zeigler (Slant of Light) and has co-written reimagined scores for the 1968 experimental silent film Le Revelateur, directed by Philippe Garrel (who approved of the project), and the Czech New Wave classic Valerie and Her Week of Wonders, and performed these scores live throughout the US with Jeff Zeigler and the Valerie Project, respectively. She has contributed and written harp parts for such artists as Kurt Vile, Thurston Moore, Sharon Van Etten, Meg Baird, Steve Gunn, the Clientele, Hop Along, Jarvis Cocker, Karen Elson, Ed Askew and Quilt.