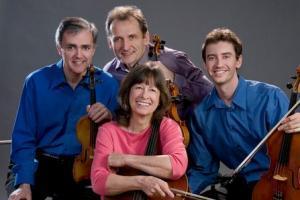 In a room in Vienna, two great musical minds meet, play quartets together, and establish a long term friendship of mutual respect, and leaps of creativity. Come and hear the results, in this exploration of the molding of the Classical String Quartet.

Decompression Chamber Music arose from the conviction that classical chamber music is as profound and uplifting today as ever. At a time when the audience for the classical is shrinking, it is our hope and purpose to reinvigorate the love and passion of chamber music by presenting a series of informal concert/discussions that will demystify the genre and attract people who might otherwise shy away from it.
It all began with a house concert in Brookline, Massachusetts on June 11, 2007. The feedback we received from that concert helped us to improve and focus our mission and concept.
Using the feedback we received from the first concert we tested our new concept at the Boston Athenaeum on November 7, 2007 and March 6, 2008. On May 1st and 5th, 2008 we gave two performances at the University of Massachusetts in Boston. The feedback from these performances sharpened our format and also confirmed that our product is compelling, illuminating, and fun. Many students approached us to say how much they enjoyed the concert and asked for more.
In the fall of 2008, we began a partnership with the performance venue One Longfellow Square in Portland, Maine. We introduced ourselves to Portland with two concerts, and followed with three new ones that season.
We are in our seventh highly successful season at One Longfellow Square. Each season presents five concerts. Through our residence in Portland we have established a loyal audience base and are steadily attracting new listeners.