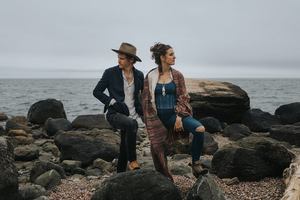 Due to unavoidable and unforeseen construction delays, this show has been moved to Lizard Lounge Cambridge. Previously-purchased tickets will be valid for the new date, otherwise refunds can be obtained by contacting bostonconcierge@citywinery.com or (617) 933-8047. Note that the show is now 21+, and the seating is now General Admission. We apologize for any inconvenience this change may cause.

This fall, with their two young children in tow, Mexo-Americana pioneers David Wax Museum will embark on the “Electric Artifacts” tour – celebrating their 10th anniversary as a band, and featuring their 1000th show.

The Electric Artifacts tour spans ten cities and explores the roots of David Wax Museum. Beginning with a series of house shows in Washington, DC that feature duo performances from David Wax & Suz Slezak, the tour explores many of the markets that helped propel the band to the national stage over the past decade. With full band shows, featuring a horn section, the tour winds its way from current hometown Charlottesville, to their previous hometowns of Northampton and Boston, with stops along the way in Baltimore, Thomas WV, Philadelphia, Saratoga Springs, and New York City. The 1000th show of their career will be a secret show on September 22, at a location to be announced.

The roots of David Wax Museum stretch back nearly a decade, and all the way from New England to Mexico. As a student at Harvard, Wax began traveling south of the border to study and immerse himself in the country's traditional music and culture. Back in Boston, he met fiddler/singer Suz Slezak, whose love of traditional American and Irish folk music fused with Wax's Mexo-Americana into a singular, energetic blend that captivated audiences and critics alike. Their 2010 breakout performance at the Newport Folk Festival made them the most talked-about band of the weekend, with NPR hailing them as "pure, irresistible joy." They released a trio of albums that earned escalating raves everywhere from SPIN and Entertainment Weekly (who described them as sounding "like Andrew Bird with a Mexican folk bent") to the New York Times and The Guardian (which dubbed the music "global crossover at its best"). They earned an invitation to return to Newport, this time on the main stage, as well as dates supporting The Avett Brothers, The Carolina Chocolate Drops, Buena Vista Social Club, and more.

It was on the road over these past few years as the band and audiences grew, though, that Wax could feel their exuberant live show evolving beyond its formative roots.

"I felt empowered to start the band because of my time in Mexico studying folk music," Wax explains. "In Boston, the term 'Americana' or 'folk' was just this catchall to describe what everyone was doing. It was helpful to use that to talk about our music at first, but we've found that our hearts feel most shaken, and the band fires on all cylinders, when we're putting on a rock show. What we've tried to retain about our folk origins is the warm sound of people playing acoustic instruments together in a room."