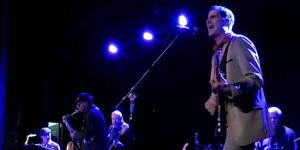 Dave Keller is an award-winning, triple-threat: an outstanding singer, an intense guitarist, and a talented songwriter.

Dave Keller is one of the finest soul and blues men of his generation. His 2013 album Soul Changes was been nominated for a Blues Music Award (BMA) for Best Soul/Blues Album. Winner of the 2012 winner of the Best Self-Produced CD of the Year Award at the International Blues Challenge in Memphis. That CD, "Where I'm Coming From", reached #2 on Sirius/XM Radio's blues channel.

After being discovered by legendary guitarist Ronnie Earl, Keller appeared as a singer and co-writer on Earl's BMA-nominated CD, "Living In the Light". Next, blues and soul fans got to hear Keller with his own band on his all-original critically-acclaimed release "Play for Love". In Sept. 2011 Keller released "Where I'm Coming From", an album of deep soul songs recorded with The Revelations, one of the hottest soul bands on the scene today. Produced by Bob Perry (Wu-Tang Clan, 50 Cent, Brian McNight, Foxy Brown), it has earned accolades from Blues Revue, Downbeat, Vintage Guitar, and many other highly-regarded publications.