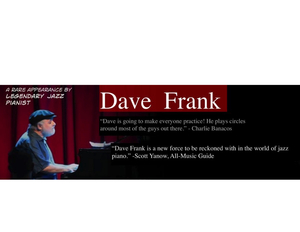 Dave Frank is one of the busiest solo jazz pianists and music educators on the scene today. He is the author of the best-selling Hal Leonard book and video series, Joy of Improv and Breakthrough to Improv, was an Associate Professor of piano at Berklee College of Music in Boston from 1987-2004, and was a co-founder of the New York School of Jazz (1983-86). In 2004 Dave moved to New York City to direct the Dave Frank School of Jazz in midtown Manhattan. The DFSOJ offers private instruction for aspiring musicians at all levels, as well as frequent concerts/workshops for the general public.

Dave Frank has been the subject of feature articles in the Boston Globe, Keyboard Magazine, and The Chronicle of Higher Learning. He can be regularly seen on the BET Jazz Network and was recently the featured guest on the NPR radio show Jazz Inspired with Judy Carmichael. Dave has four critically acclaimed solo piano CD’s released on the Jazzheads label: Portrait of New York, Turning it Loose!, Ballads and Burners, and Power of the Piano. Dave’s teachers include the legendary Lennie Tristano, Charlie Banacos and John Larosa.