Dave Derby of The Dambuilders x ONCE VV 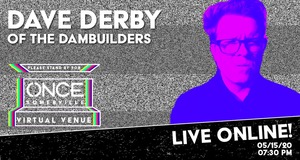 Dave Derby began his professional career as the lead singer/bassist of The Dambuilders, a Boston-based band who released 6 full-length albums as well as a series of 7 inch singles and EPs on various labels in Euorpe, North America and Australia from 1989-1997. Dave has reformed the band under the moniker Dambuilders Sr. featuring Sean Eden (Luna, Elk City), Claudia Chopek (Echo of the Ghost) and Mike Savage (Fudge, Cherry 2000).

In addition to his work with Dambuilders Dave is the mastermind of Gramercy Arms, a revolving New York based collective of musicians, artists and friends which includes Chopek, Eden as well as members of Guided by Voices, Nada Surf, Luna, and Elk City among others. Dave has also released solo recordings and produced records for and performed with and produced records for Lloyd Cole since 1996

In order to access this livestream please RSVP for tickets via Eventbrite. A link to the livestream will then be emailed to you once you have completed the registration, then again 48 hours prior, 2 hours prior, and 10 minutes before the event begins just for good measure!

About ONCE Virtual Venue:

In May of 2020 ONCE Somerville, an independent venue in the Boston Metro area, decided to launch a “virtual venue”. The venue was started in response to the COVID19 crisis and the massive amount of cancellations that occurred in the wake of stay at home order. ONCE VV is a place for audiences to interact and enjoy performances that range to suit all sorts of palates. Music, tutorials, fitness, games and more.