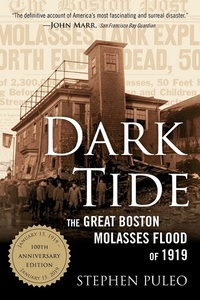 Please join us to hear author Stephen Puleo speak on the centennial anniversary of the Great Molasses Flood in Boston.

Around noon on January 15, 1919, a group of firefighters was playing cards in Boston's North End when they heard a tremendous crash. It was like roaring surf, one of them said later. Like a runaway two-horse team smashing through a fence, said another. A third firefighter jumped up from his chair to look out a window-"Oh my God!" he shouted to the other men, "Run!"

A 50-foot-tall steel tank filled with 2.3 million gallons of molasses had just collapsed on Boston's waterfront, disgorging its contents as a 15-foot-high wave of molasses that at its outset traveled at 35 miles an hour. It demolished wooden homes, even the brick fire station. The number of dead wasn't known for days. It would be years before a landmark court battle determined who was responsible for the disaster.

Stephen Puleo is an author, historian, teacher, public speaker, and communications professional. He has written six narrative nonfiction books and has a seventh on the way. All of his books have been Boston regional bestsellers and have received national recognition.