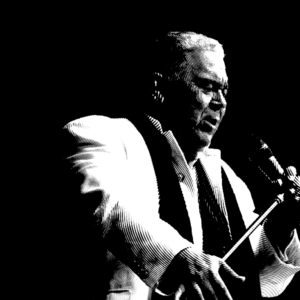 Get ready Boston! The national voice of Puerto Rico, Danny Rivera, is coming to town! Ágora presents a very special concert by the man who has delighted and inspired us for more than five decades with his voice and his passion. Join us Saturday, October 9 at 7:00 pm in the Sanctuary at Arlington Street Church, Boston. This event is possible in part by the Boston Cultural Council.

Danny Rivera, from the "El Fanguito" neighborhood of Santurce, a rich cultural community of Puerto Rico, has a prolific and extraordinary career spanning over 50 years. More than a singer he considers himself an artist and interpreter of Ibero-American music.

With more than 80 musical productions, Danny Rivera has immortalized some of the most beloved songs in Latin America from the most recognized composers of all time, such as Agustín Lara, Rafael Hernández, Felipe Rosario Goyco “Don Felo”, Roberto Carlos, Pedro Flores , and Alberto Cortés.Danny was nominated twice for a Grammy Award for the production "Unforgettable Tito", dedicated to the great teacher Tito Rodríguez and for the album "Muy amigos" with Eydie Gormé.

In Spain, where he lived for three years, he recorded four productions under the tutelage of Rafael Ferro. He made his album "Danny" in Los Angeles, California with the musical direction of David Foster, sound engineer Humberto Gatica and as arranger Eric Bulling. In the production "To say goodbye" had the participation of Don Costa, who was the musical director of Frank Sinatra, and Paul Anka. Danny holds the distinction of being the only Puerto Rican soloist to perform four times (1979, 1989, 1999, and 2010) in the legendary Carnegie Hall.

During his successful career, Danny has shared the stage with great and respected musicians and performers and has showcased his artistic talents in repeated presentations at entertainment and cultural centers such as the Caribe Hilton hotel, Madison Square Garden, Tropicana- Atlantic City, Miami Dale County, Palacio de Bellas Artes de México and the Pregones theater where he has starred in several directed plays. by Rosalba Rolón.

His love for human and universal rights has led him to lend his voice and energy to countless educational, cultural, and social causes in Puerto Rico, Cuba, and the Dominican Republic, some of them being the Artes de Paz para Nuestro América foundation. In 2004, he inaugurated the International Chair of Plastic Arts and Music in Havana and made a documentary about Puerto Rican cultural traces in eastern Cuba.

In the summer of 2001, he spent thirty days in the United States federal prison in Puerto Rico for his participation in a demonstration of civil disobedience against the presence of the United States Navy on the island of Vieques. From that experience was born the book Enamorado de la Paz (published by his own publishing house "Makarios").

In 2008 he was named a citizen of the Dominican Republic in recognition of his philanthropic and social work around the island. Danny sang "Madrigal", "Amar o morir" and "Tu pueblo es mi pueblo" in front of 1,150,000 people at the Peace without Borders concert in Havana, a concert organized by Juanes and seen throughout the hemisphere by hundreds of millions of TV and Internet viewers. In 2019, he became the first Puerto Rican to be appointed as a cultural ambassador by the Latin Institute of Music. Danny Rivera has performed genres as varied as ballads, bolero, salsa, waltz, tango, bachata, merengue, carols, dance music, flamenco, hymns, and children's songs. Currently, close to turning 60 years of musical career, Danny continues to make record productions and concerts. That’s when he’s not enjoying the sights and sound of his beloved homeland and sharing it with us, his “Enjambre cibernético”.
Ágora is the partner of Latinx arts and culture. They create, empower, and promote the sustainability of the makers of Latin American Culture. You can learn more at www.culturalagora.com