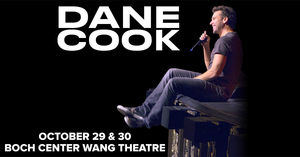 Cities across North America will welcome back the man Entertainment Weekly calls "a comedian phenom and icon" when Dane Cook performs his first full-scale tour since 2013. The Tell It Like It Is tour promises more of the trenchant observations, energetic physical comedy, deft wordplay, and rapid-fire improv skills that have made Cook one of the most successful performers in the world of comedy.

Raised in Arlington, Massachusetts, Cook began performing in the Boston area before coming to Los Angeles in 1996. With his rising profile came appearances on Comedy Central, including his first stand-up special in 2000. Long before comedians vied for viral fame and online followings on Twitter, Facebook, and Instagram, Cook developed a loyal community of fans via his pioneering use of MySpace.

Cook's wider breakthrough arrived with the 2003 release of Harmful If Swallowed, his first CD and DVD. Cook's high-energy delivery and brilliantly absurd observations on everything from shark attacks to fast food restaurants established him as the 21st century's first new comedy superstar.

Released in 2005, Cook's second album — Retaliation — entered the Billboard chart at No. 4, the highest placement for a comedy album since Steve Martin's Wild and Crazy Guy in 1978. It went on to sell more than 2 million copies. In another sign of Cook's phenomenal success, he became only the second comedian to sell out New York's Madison Square Garden. He also recorded his third album, 2008's Rough Around the Edges, at the legendary arena.

It seemed whenever the prolific comedian was not on stage, he was on a movie set. And while Cook's roles in hits such as Good Luck Chuck and Dan in Real Life emphasized his comedy skills, he displayed his versatility with characters like the aspiring serial killer in Mr. Brooks, the 2007 psychological thriller in which he co-starred with Kevin Costner. His most recent screen credits include the science fiction thriller 400 Days, the Disney animated hit Planes, and the TV fantasy series American Gods.

As busy as he's been in Hollywood, Cook's first love remains stand-up. He's continued to develop new material at surprise sets at venues like the Laugh Factory in Los Angeles. Now with the Tell It Like It Is tour, he's ready to let audiences know what's been on his mind, and it's sure to be as memorable as it is funny.