Dalton and the Sheriffs 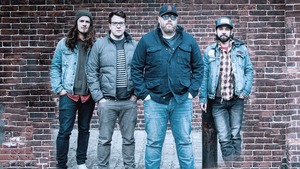 Armed with legion of Boston fans and a new sponsorship from Bud Light, Dalton & the Sheriffs hit the road in the fall of 2016, earning a headlining slot on the Bud Light Down South Tour. From Virginia to Tennessee, from Florida to Alabama and Mississippi, the band brought Boston country music to the south to high praise.

Along the way, the band landed marquee opening slots for acts such as Sam Hunt and Jon Pardi at the Battle at Bristol, as well as supporting A Thousand Horses and Mickey Guyton at the Titans-Jaguars Thursday Night Football game at Nissan Stadium. In between their travels, the band also found time to open twice for LOCASH in the Boston area. Their work on the tour -- and at various additional stops such as the famed Bluebird Cafe's Sunday Night Writer's night -- earned the band three shows at Tootsie's Orchid Lounge playing their own music in November and December.

The band enters 2017 with a new EP on the way and their popular single "You Ain't Her" getting regular rotation on iHeartRadio's 101.7 The Bull's Backyard Country show.

With a new Bud Light touring van, Dalton & the Sheriffs are primed to bring their distinctive brand of country music to the country at large. Stay tuned for the announcement of several major appearances for the Summer of 2017.