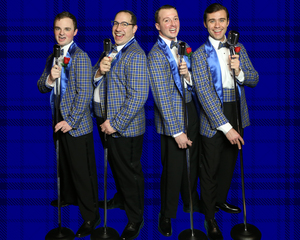 This winter, Curtain Call Theatre in Braintree will present Forever Plaid, directed and choreographed by David Costa and music directed by Dan Moore.

Forever Plaid is much more than a “whole lot of plaid” however. This musical revue was first performed Off-Broadway in 1989 and since then has become an international sensation. In fact, Forever Plaid has spawned musical sequels, as well as a motion picture.

Forever Plaid tells the story of a 1950s close-harmony, clean-cut “guy group” who never get a chance to perform their first big concert on stage as they are killed in a car crash. This high-school quartet gets a second chance and returns from the afterlife for one final chance to perform. “We would all love a second chance at pursuing our dreams.” Costa said. “The Plaids get that opportunity and have a whole lot of fun along the way.”

Audiences will have a whole lot of fun too listening to classic hits including, “Three Coins in the Fountain,” “Lady of Spain,” “Cry,” “Sixteen Tons” and “Chain Gang.”

“After our success with Nunsense last season, we wanted to do a similar show,” Producer Toni Ruscio said. “Forever Plaid was the perfect choice.”