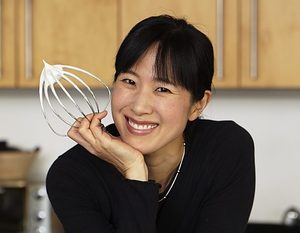 Join Sheryl Julian, former Boston Globe food editor, for a discussion with Joanne Chang. In 2000, Chang opened Flour, a bakery and café in Boston’s South End. Flour features breakfast pastries, breads, cakes, cookies and tarts as well as sandwiches, soups, and salads. There are now 8 locations of Flour in Boston and Cambridge. In 2007, she and Christopher Myers opened Myers+Chang to bring the food that she grew up with along with the hospitality that Christopher was known for to Boston. Myers+Chang was awarded 4 stars by The Boston Globe in September 2017 at their 10th anniversary.

Chang is the author of four cookbooks and currently working on her fifth, which will be available Fall 2019. She is the winner of the 2016 James Beard Award for Outstanding Baker.

A reception with free food from Flour Bakery will follow the discussion.