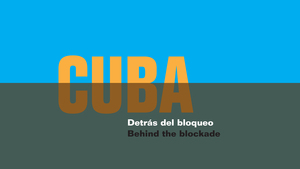 Join the Northeastern University's College of Arts, Media an Design (CAMD) community in celebrating the power of interdisciplinary global experience at the opening of Cuba: Detrás del Bloqueo/Behind the Blockade.

For 60 years, relations between the United States and Cuba have been strained. At the governmental level, that has led to public attacks, military threats from both sides and ultimately. sanctions designed to create desperation and push Cuban officials to abandon communism.

Today, the situation is dire. But both in 2018 and 2019, Northeastern University students from three academic programs led by CAMD professors Luis Brens and Carlene Hempel showed that strife between the countries’ power structures does not need to divide the people. On the streets and in the neighborhoods of the island, 55 students were able to connect through their camera lenses notebooks and recording equipment, capturing a way of life in Cuba that defies a blockade intended to keep these two populations apart.

Detrás del Bloqueo/Behind the Blockade is a testament to their work and to a hope that one day, the U.S. and Cuba can find a way to become good neighbors again.