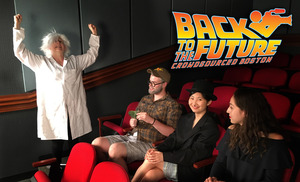 Crowdsourced Boston is a public art project, inspired by Crowdsourced Cinema of Northampton Community Television (NCTV), started in 2015, in which the surrounding community collaboratively remakes a famous film by dividing the film into about 40 different scenes, and then giving each participating team one of those scenes to recreate however they like. They then stitch all the scenes together to create a full-length film. This year, they are creating Back to the Future.

Each team signs up for a scene from the film to interpret creatively – it could be filmed with live action, animation, stop motion, remix, puppetry, and other visual styles. The only rules are to follow the same action, dialogue, and total running time of a short scene without using copyrighted images or audio.
We also invite musicians, composers, and producers to participate in creating an original score to a randomly assigned section of the movie.
All these scenes will be stitched together to create a full-length film, broadcast on each participating community media center’s cable channels, and distributed on the web.