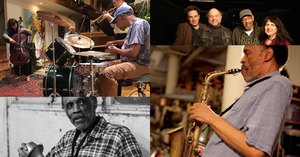 Spanning several generations, and covering a truly orchestral range of sounds and dynamics, the players are as strong and idiosyncratic as they are flexible and deeply in tune with each other and the music.

The return of a Boston legend from New York, drummer Syd Smart

Multi-instrumentalist Daniel Carter has been an active player in the New York City scene since the early 1970s! He is perhaps best known as a member of the collective groups Other Dimensions in Music (with Roy Campbell, William Parker, and Charles Downs) and Test (with Sabir Mateen, Matthew Heyner, and Tom Bruno), and has also worked with Matthew Shipp, Sun Ra, Cecil Taylor, Susie Ibarra, Sam Rivers, Yo La Tengo and far too many more to list here. Carter co-founded the 577 Records label with drummer Federico Ughi in 2001.
Over the past 5 decades Daniel has performed and recorded with William Parker, Matthew Shipp, Cecil Taylor, Sun Ra, Sam Rivers, and many more, and can be heard on over 100 recordings. He is known for his dedication to total improvisation and his deep empathy for the musicians he works with; his broad range of sounds will be a welcome addition and an easy fit for the group.
Eric Zinman, Glynis Lomon, and Syd Smart – all former students of the legendary trumpet player Bill Dixon – began performing together as New Language Collaborative in 2005 and recorded their first album for Ayler Records in 2007. Montreal’s Ellwood Epps (another Dixon student) has joined the group in more recent years and they released a subsequent recording together in 2019.

Another appearance of Canadian trumpeter Ellwood Epps (organizer of the contemporary NLC), already a force in the creative music scene in Boston!
These five musicians are uniting for the first time for an international tour. Spanning several generations, and covering a truly orchestral range of sounds and dynamics, the players are as strong and idiosyncratic as they are flexible and deeply in tune with each other and the music.
“One release I've been listening to in the past week I think especially interesting. It's by the New Language Collaborative and they title it Unified Fields. The four-person juggernaut responsible for the music contained therein create seven excellent equal-voiced quartet excursions. Now you may not have heard of Eric Zinman (piano), Mario Rechtern (reeds), Glynis Lomon (cello) and Syd Smart (drums) but that's OK. This is not music of a cult of personality, star-takes-all sort. It's more akin to some of the earlier improv groups like the Spontaneous Music Ensemble, MEV and AMM. This band though sticks a little closer to the vocabulary of free jazz than the above mentioned precursors. But not with a solos and rhythm concept. At least not very much. The four-way equality of voices, the musical dialog is continuous and unfailingly coherent. There is a judiciousness of sound involved, a deliberateness and a free-sound eloquence that distinguishes this outing. There are moments of frenetic density, as one expects in this music, but nothing continuous, and the various moods and densities seem to grow out of one another in a kind of natural logic the four musicians share”. Grego Edwards, gapplegatemusicreview