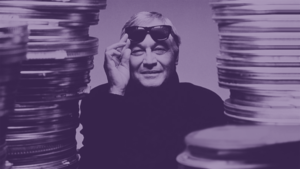 The Roger Corman Graduate School of Film, as it came to be unofficially known, was inaugurated in the 1960s when the maverick producer—having already made his name helping establish the teenager films released to the nascent drive-in circuit of the late 1950s—gave directorial work to first-timers including Peter Bogdanovich, Francis Ford Coppola, Jack Hill, Dennis Hopper, and Stephanie Rothman. But the fake-school took fuller shape in the early 1970s when Corman set his own directorial efforts aside, established the distribution company New World Pictures, and made low-budget exploitation pictures directed by ambitious young filmmakers his official stock-in-trade—resulting in a 15-year run where he financed, produced, and/or distributed the first commercial narrative features directed by artists including Jonathan Demme, Scorsese himself, and Penelope Spheeris. This course will look closely at the history and legacy of the Corman School through five movies released during that New World era, separating the myths from the (supposed) facts in the hopes that we might reach a realer understanding of the immense effect that Corman’s exploitation-film model had on American cinema during the second half of the 20th century.

In week one we’ll look at Scorsese’s Boxcar Bertha (1972) and discuss the exact specifications of a Corman movie: what his young talents were expected to deliver—mostly nudity and violence, plus a "little bit of a social statement"—and what that framework allowed them to smuggle in on the side. Week two will consider the specifically masculine nature of New World’s productions, as we screen Demme’s Caged Heat (1974) and look at the roles that women were expected to play in the Corman films of the 1970s. Week three will look at the elephant in Corman’s room, money, as we view Saint Jack (1979), one of the few “art films” that Corman produced, and finally week four will explain the way that Corman’s knack for exploiting the commercial potential of fledging countercultures emphatically contributed to the very identity of American movies from the 1950s onward, as we view two of the last Corman films that seem genuinely engaged with the youth culture of their respective times: Allan Arkush’s Rock ‘n’ Roll High School (1979) and Spheeris’ Suburbia (1983), both of which harken back to the exact sort of movie Corman started his own career on in the late 1950s.
By looking closely at the films, filmmakers, and whole eras of American cinema that Corman’s own work produced, we might find the more genuine legacy of the Corman School—one that spreads far past the grindhouse homages of the directors who grew up on the producer’s work, and courses through commercial movies on a level much deeper than mere citation.

Jake Mulligan is the film section editor and critic at the weekly newspaper DigBoston. This is his second Cooldige Education class, following Defining Screwball Comedy.

The $60 registration fee gets you access to all four 90-minute live Zoom discussion sessions, all four pre-recorded lectures, as well as recordings of the discussions if you have to miss a week. However, the registration fee does not include access to any of the films being covered in the class--you should budget in anywhere from $15-30 to spend on film rentals, varying based on film availability and which streaming services you subscribe to.