Coolidge at the Greenway: 'Back to the Future Part II' 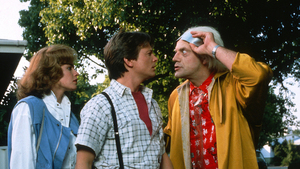 The Coolidge Corner Theatre partners with the Rose Fitzgerald Kennedy Greenway Conservancy for a free outdoor movie series this summer. The screenings will take place at sunset on June 18, July 18 and August 13 at the Greenway's Wharf District Park (located between Milk and India Streets in Boston). All films will be shown in 35mm

An enduring classic, American Graffiti celebrates an America of the early 1960s, where teenagers cruise the streets in hot rods and rock and roll tops the music charts. Inspired by his youth in the valley town of Modesto, California, Graffiti was George Lucas’ second feature film, and is a masterwork of vibrant colors, exciting soundtracks, and endearing characters. A story of coming-of-age, it remains one of the most successful films in history.

His new assignment seems routine: protecting a star witness for an important trial. But before the night is out, the witness lies dying and cool, no-nonsense Detective Frank Bullitt (Steve McQueen) won't rest until the shooters and the kingpin pulling their strings are nailed.

Tuesday, August 13: 'Back to the Future Part II'

Getting back was only the beginning as the most spectacular time-travel adventure ever continued in Back to the Future Part II—the sequel that proved that lightning can strike twice. Picking up precisely where they left off, Marty and Doc (Michael J. Fox and Christopher Lloyd) launch themselves to the year 2015 to fine-tune the future, but inadvertently and disastrously disrupt the space-time continuum. After a stop-over in an alternate 1985, Doc and Marty find their only chance to fix the present is to time hop back to 1955 all over again—before it’s too late.

See all other #freemovies series this summer.