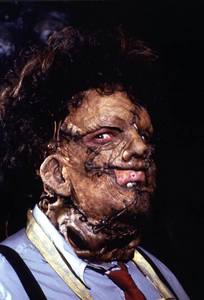 Leatherface may have been hurt at the end of The Texas Chain Saw Massacre, but like a wounded predator, that only made him hunger for more. He and his kin are back on the rampage, bathing the Texas roads with rivers of blood.

This time, however, Leatherface has met his match in Dennis Hopper's Texas Police Lieutenant "Lefty" Enright, father of the sole survivor of the original massacre, Sally. 13 years ago she was ravaged by a backwoods family who killed and ate her friends. She escaped with her life, but when authorities couldn't find a trace of the horror story that she recounted, she was deemed mentally unstable and the case was discarded.

Deep down Lefty knew that his daughter was telling the truth and now that mysterious chainsaw murders have begun to happen again he will get his chance to avenge her.

Tobe Hooper returns to direct this, the most insane and horrifyingly unstable entry in the Texas Chainsaw series.