Coolidge After Midnite: 'The Slumber Party Massacre' (on 35mm) 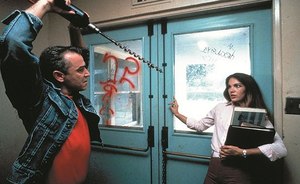 When Trish (Michele Michaels) decides to invite her high school girls’ basketball teammates over for a slumber party, she has no idea the night is going to end with an unexpected guest (an escaped mental patient and his portable power drill) crashing the party in the cult classic, The Slumber Party Massacre.

An eighteen-year-old high school girl is left at home by her parents and she decides to have a slumber party. Meanwhile, a murderer of five people with a propensity for power tools has escaped and is at large, and eventually makes his way to the party, where the guests begin experiencing an attrition problem, with only the newest girl in school to help them.