Coolidge After Midnite: 'The Abominable Snowman' (on 35mm) 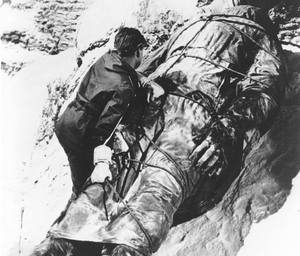 Botanist Dr. John Rollason (Peter Cushing) decides the join the exploration team of crass, American showman Tom Friend (Forrest Tucker) on a dangerous expedition into the Himalayas to search for the legendary Yeti.

Soon after setting up camp, the group is attacked by a large beast which is shot by trapper Ed Shelley (Robert Brown) and stored in a cave to attract a live specimen. Before long, the strain of the expedition is felt and the party begins to lose control. To his growing terror, Dr. Rollason suspects that the race of giant "monsters" not only exists, but is capable on invading the thoughts of human beings.