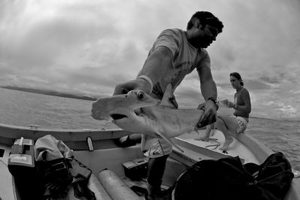 The scalloped hammerhead shark is an endangered species threatened by overfishing, bycatch, and the shark fin trade. Scientist Andres Lopez and his partner, Ilena Zanella, founded Misión Tiburón (Shark Mission) in Costa Rica to study and protect these charismatic animals. Through their years of research and tagging studies they have identified the sharks’ critical nursery habitats and helped to enact national and international conservation measures, including CITES listings, to better protect these animals. This work was supported in part by the New England Aquarium’s Marine Conservation Action Fund (MCAF). Lopez and Zanella have also engaged fishermen, communities, government officials, and schoolchildren in their conservation efforts, growing a vital and broad base of support for the sharks. Join us to hear MCAF Fellow Andres Lopez and his colleague Enrique Uribe speak about Misión Tiburón’s comprehensive approach to shark conservation in Costa Rica and their efforts to promote a shark sanctuary in Golfo Dulce, a critical nursery habitat on the country’s Pacific coast.

The MCAF Ocean Conservation Fellows Program is supported in part by the Institute of Museum and Library Services.