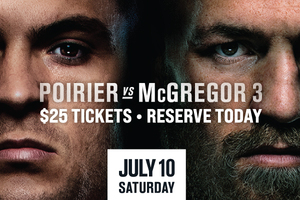 Join us for our fight night watch party on Saturday, July 10th to see Dustin Poirier battle Conor McGregor. Watch on our huge video wall and surrounding HDTVs, perfectly situated around the restaurant so you won’t miss a single punch.

Streaming will begin at 10 pm EST. There are four fights before the title fight, so plan to stick around later into the evening for the main event.

Tickets are being sold on a first come, first serve basis for both seats and standing room. Plan to get there early for a seat!