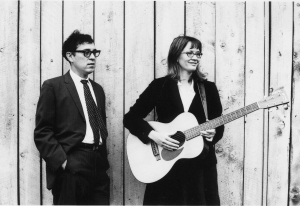 Join us for a Sunday afternoon concert in the beautiful historic Richardson Building featuring the folk duo Hungrytown. This event will also be LIVESTREAMED to our YouTube channel (https://www.youtube.com/thomascranepubliclibrary).

After more than fifteen years of world-wide touring and three album releases, Rebecca Hall and Ken Anderson--otherwise known as the folk duo Hungrytown--have earned a reputation for the quality and authenticity of their songwriting.

Hungrytown's introduction to folk music came when a close friend--who died young due to a tragic misdiagnosis--entrusted to them her collection of 1960s folk albums and her guitar (which has since been featured on all of their albums). Inspired by the grit and true-to-life experiences she heard in these traditional ballads, Hall was inspired to write the lyrics that later became her first songs, aided by Anderson’s flair for musical arrangement.

They released their first CD, Hungrytown, in 2008; Any Forgotten Thing in 2011; and Further West in 2015. The couple continue to spend more than half of each year on the road, especially roads in North America, Europe and New Zealand. Hungrytown's music has received extensive radio airplay worldwide and has appeared on several television shows, including Comedy Central's The Daily Show, IFC's Portlandia and Netflix's Lady Dynamite.

Their third and latest album, Further West, made the top 10 on the American Folk DJ charts for two months, and at least 14 "Best of the Year" lists.

Please note that capacity for this event will be limited and masks are recommended. Doors will open 15 minutes before the start of the program.

Sponsored by the Friends of the Thomas Crane Public Library.