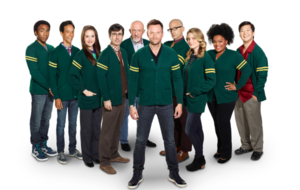 Six seasons and a Zoom call: The cast of “Community” and creator Dan Harmon are reuniting for a virtual table read and Q&A, in order to benefit COVID-19 relief efforts.

Among the participants will be Donald Glover, who departed “Community” during its fifth season — marking the first time he’s been a part of a “Community” event since leaving the show. Stars Joel McHale, Gillian Jacobs, Danny Pudi, Yvette Nicole Brown, Alison Brie, Jim Rash, Ken Jeong and Glover are all set to join the table read, along with Harmon. Pascal will also join in as a special guest.

The table read will be shown in its entirety, along with a Q&A of fan questions, on Monday, May 18, at 2 p.m. PT (5 p.m. ET) via Sony Pictures TV’s “Community” YouTube page. The cast is set to read “Cooperative Polygraphy,” the fourth episode of Season 5, which first aired January 16, 2014 on NBC.

For the Q&A, Fans can submit their questions on social media using #AskCommunity and tag @CommunityTV.

As part of the event, fans will be asked to contribute to two charities: José Andrés’ World Central Kitchen and Frontline Foods, both of which are involved in COVID-19 relief efforts to get fresh, nourishing meals to responders working on the frontlines and vulnerable communities across the country.