Commemoration of the 77th Anniversary of the Attack on Pearl Harbor 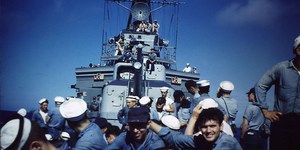 The National Parks of Boston, USS Constitution Museum, and USS Constitution cordially invite you to commemorate the 77th anniversary of the December 7, 1941 attack on Pearl Harbor. The ceremony will take place adjacent to USS Cassin Young, a Fletcher-class destroyer named for Commander Cassin Young, recipient of the Congressional Medal of Honor for his actions during the attack. We will honor the men and women who made the ultimate sacrifice to protect the United States and those who continue to do so today. A wreath will be laid from the stern of USS Cassin Young and a luncheon will follow in the USS Constitution Museum, courtesy of the City of Boston’s Veterans Services Department.