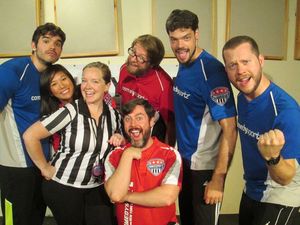 ComedySportz® is in 26+ cities nationwide, in Europe...and now Boston! ComedySportz is a hilarious 90-minute improv comedy competition where two teams of professional players compete for laughs and points while a referee keeps things moving and calls fouls. Players create comedy scenes, songs and games right on the spot based on your suggestions. You choose the winner and the show is never the same twice. It’s fun, fast-paced, smart comedy for everyone.