Comedy Show at the Burren 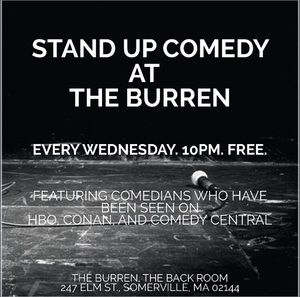 Upload photos
The Burren has been a legendary place for comedy for years. Fans have been coming to the back room for comedy to see some of Bostons best local talent to even drop in sets by national headliners such as Joe List and Louis CK. It has become a regular stop for touring comics such as Gary Gulman (Tourgasm, Conan) and Dan Boulger (Comedy Central). Come see everything from headliners trying out there new well-crafted material to comics getting ready for there late night comedy central or Conan set. Every Wednesday. Back Room. 10pm.