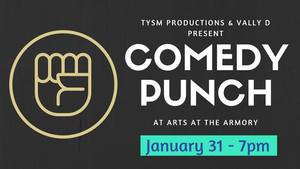 Where:
https://www.eventbrite.com/e/comedy-punch-tickets-42092046444?aff=bostoncalendar Center for Arts at the Armory
191 Highland Avenue
Somerville, MA 02143

Donations accepted at the door.

"So funny it feels like being punched!" - who would say this? of course this quote is made up!