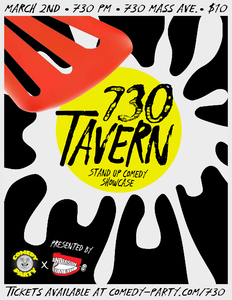 Comedy Party joins forces with Anderson Comedy to bring you the one and only 730 Tavern Stand Up Comedy Showcase! Take to the tavern for a night of hilarity featuring comedians from Comedy Central, Funny or Die, SiriusXM & more!

This show sells out every month for a reason. We bring good vibes to Central Square's favorite gastropub and pair them with hilarious comedy. Need we say more?