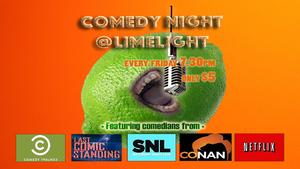 Experience Comedy Night at Limelight Stage + Studios in Boston's theater district. Held every Friday on the main stage at Limelight, we bring you some of the funniest comics in the country -- and it's only 5 bucks!

Our lineups feature some of the funniest up and comers in town alongside headlining comedians who've been featured on Comedy Central, Last Comic Standing, Conan, and more!

Swing by on February 2nd for a hilarious lineup featuring:

Get a ticket online to reserve a table!