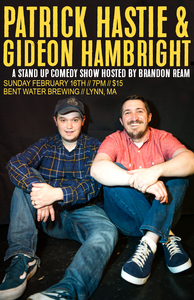 Patrick Hastie is a comedian from Glenwood, Iowa who now lives in Brooklyn, New York. He has performed all over the country and has been featured in festivals like the Out of Bounds Comedy Festival, the Orlando Indie Comedy Festival and the Memphis Comedy Festival. He can be heard weekly on the podcast The Nostalgic Front, has been featured on The Chive, College Humor and The Interrobang and he co-produces the popular monthly show Jackknife Comedy at The Creek and The Cave in Queens. Patrick is a very nice guy and his 5 year plan is to be cool and live forever!