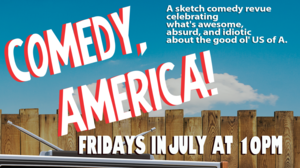 America. Land of the free. Home of the brave. Where every person has the right to life, liberty, and the pursuit of COMEDY!

ImprovBoston’s biggest sketch and musical comedy revue is back! That’s right, Comedy, America! is returning for it’s SIXTH glorious year. In honor of our sixth anniversary, we’ve gathered the best sketch writers, actors, and musicians to create a our BEST spectacle yet! And as always, celebrating ‘Murica as only ImprovBoston can.

Join us as we celebrate America’s past and present. Its best and its worst. From cheeseburgers to fireworks. From family BBQs to the founding fathers. From the DNC to *NSYNC. Comedy, America! has one goal: to create a show as awesome, absurd, smart, and idiotic as the actual good old US of A.