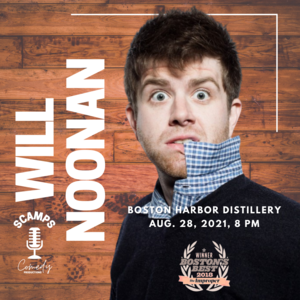 BOSTON – Will Noonan, a topline Boston comedian known also for being “The Honda Guy,” headlines as Scamps Comedy brings stand-up to the Boston Harbor Distillery on Saturday, Aug. 28.

Joining Noonan will be host Dave Rattigan, Andrew Della Volpe and Izzy da Rosa. The show is at 8 p.m. Tickets are $20, available at ScampsComedy.com (bit.ly/scamps082821) and at the door.

The Boston Harbor Distillery is a distinctive venue and interesting new spot for comedy. Located at The Port on Boston Harbor in a renovated entrepreneurial center from the mid-1800s, it offers award-winning spirits that integrate passion, history and the finest quality ingredients. Built in a renovated mill building with 40-foot-high ceilings and 100 windows, the distillery offers tours throughout the day at its Ericsson Street location, on Boston’s waterfront in the Neponset section of Dorchester.

Will Noonan was named “Boston’s Best Comedian” by the Improper Bostonian magazine, and is sometimes known as “The Honda Guy” for his role as spokesman in Honda commercials on radio and TV all over New England. He also had a fan-favorite role in the Netflix movie “The Sleepover.”

He is well-known for his internet presence, with 16K followers of his Twitter account, @WillNoonan (including notables such as Barak Obama, Joe Rogan, Jim Gaffigan, Bert Kreischer and Andrew Schulz). His jokes, memes and standup shots continue to attach millions of views on Reddit, Imgur and The Chive.

Noonan has appeared on The Oddball Comedy Festival with Amy Schumer, Hannibal Buress, and Sarah Silverman, told a story on NPR’s “This American Life” and was named Comedy Ambassador and Moment Maker by Microsoft. He has appeared on MTV‘s “Ridiculousness,” “Laughs” on FOX, “Gotham Comedy Live” on HULU and his comedy is played often on Sirius XM.

Dave Rattigan is one of New England’s busiest comedians. His “Dave Rattigan: Thinks He’s Funny” CD was played on Sirius Satellite Radio and he’s written humorous pieces for several publications, including The Boston Globe and Christian Science Monitor. He wrote and produced funny webisodes from the Post Office Golf League series and acted in the independent film “Heavy Times” and in commercials for iParty and Olympia Sports. He performed three times on the syndicated “Steve Katsos Show” and is a voice actor in the feature-length animated “Drill Booth,” scheduled for release in 2022. A former journalist, he co-hosts the “Inside the Thin Blue Line” podcast.

Andrew Della Volpe got his start working as an intern at Sacha Baron Cohen’s Four by Two Films while studying government at Colby College and has never gone back to thoughts of a serious job. He performs nearly nightly throughout New England and Boston and has become one of the fastest rising talents in the city. He’s performed in the prestigious Hampton Beach Comedy Festival, at the Palace Theatre in Manchester (N.H.), at the legendary Nick’s Comedy Stop, The Comedy Scene at Patriot Place and South Boston’s Capo Supper Club.

Izzy Da Rosa is a Boston-born, New Hampshire-raised young woman who loves comedy, writing and attention. She started stand-up after retiring from competitive cheerleading and has been hooked ever since. As the daughter of immigrants from the Cape Verde Islands, she jokes a lot of her experience as a first-generation American and ethnically ambiguous Black girl. She has performed all over New England, most notably at Nick’s Comedy Stop, the Comedy Studio, ImprovBoston and Empire Comedy Club.

For more information, check out ScampsComedy.com.