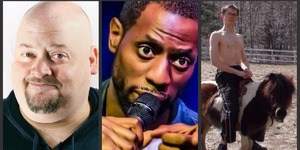 Admission is $15.00 per person and includes one beverage. A drink, and some laughs, what better way to head into the weekend.