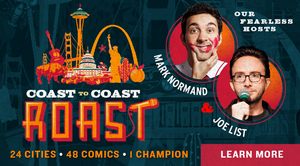 Beginning May 7, the Coast to Coast Roast puts city reputations on the line in a 3-week digital roast competition hosted by comedians Mark Normand and Joe List.

Armed with only wit, banter, and hometown pride, 48 rising comics pair up to wage war for their respective 24 cities across North America. Only the funniest team will rise from the ashes and be crowned the ultimate Coast to Coast Roasters.

Dan Crohn has been performing stand-up comedy in and around Boston for years. His jokes can be heard on SiriusXM Radio and he has been a guest on the popular podcast "WTF with Marc Maron." Dan was named one of the Top 100 Comics for Season 9 of "Last Comic Standing" and has recently appeared on "Gotham Comedy Live" on AXS TV and "Laughs" on Fox.

Will Noonan was named Boston’s Best Comedian 2018 by "The Improper Bostonian" magazine and is sometimes known as “The Honda Guy” for his current job as spokesman in Honda commercials on tv and radio all over New England. He has appeared on “Laughs” on Fox and Hulu, “Gotham Comedy Live” on AXS TV, and his comedy albums are played often on SiriusXM.