ClueProv: A Comedy of Murders 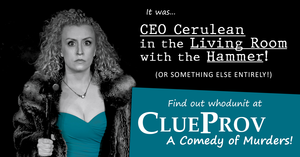 A Murder, A Mansion of Suspects, A Few More Murders, A Pile Of Weapons And No Script To Be Found.

ClueProv: A Comedy of Murders is a fully improvised murder mystery in the style of the beloved 1985 movie and 1949 board game. The characters are created in seconds at the start of the show. Their backstories, beliefs and relationships develop as they explore the sprawling mansion. And after the murder, they put on their detective hats and contend with secrets as they are revealed in real time to great and shocking effect.