ClueMaster: Stories From The Escape Room 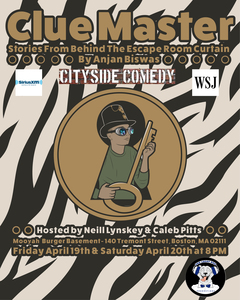 Ever wonder what it's like in the control room of a popular escape room? Join Anjan Biswas, esteemed ClueMaster at the biggest escape room chain in the country, for two nights of hilarious storytelling. Secrets will be revealed.

Brought to you by You Lucky Dog Productions.
Hosted by Neill Lynskey and Caleb Pitts.

Anjan Biswas is a comic, actor, and entertainer who has brought his stand-up act all over the world in venues spanning the U.S., the U.K., and Asia. He has gigged with Comedy Central Asia and at the Edinburgh Fringe Festival. In 2013, Anjan’s self-produced solo show won an excellence award at the New York Fringe Festival and garnered a feature article on The Wall Street Journal, as well as several rave reviews. Anjan has appeared on WBAI radio’s The Artsy Fartsy Show, SiriusXM, and hosted AB radio with Margaret Cho. He has starred in national commercials and is co-host of the popular Monday night show Cityside Comedy, which is widely regarded the best comedy show in the country.

‘Memorable and insightful.’ **** – FRESHAIR, the radio station of the Edinburgh Fringe Festival