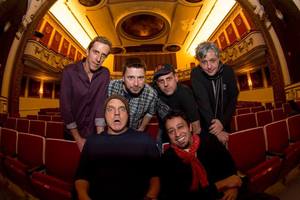 It was a cold February night in 1998 when Mike Rivard assembled some
of Boston's finest at The Lizard Lounge to explore composed grooves in
the spirit of some of Bill Laswell's Axiom-based projects. Inspired by
Laswell as well as the Illbient and live drum'n'bass scenes that were
happening in NYC, he called upon friends from various bands he played
with, including Mark Sandman's Hypnosonics and the Either/Orchestra,
and Club d'Elf was born. This one show begat a residency, which caught
on fast with local audiences drawn to the sinewy trance grooves,
anything-goes spirit, and constantly-changing roster of guest
musicians. A mind-boggling array of special guests were drawn into the
"club", including Sandman, DJ Logic, Ryan Montbleau, Marco Benevento,
Hassan Hakmoun and Reeves Gabrels.

Two of the guests who have appeared most with the band over the years
- keyboardist John Medeski and guitarist Duke Levine - will join the
band for this special 20th Anniversary show at The Lizard. Levine was
featured at that first show in February 1998, with Medeski appearing a
month later. Both are also featured on the band's latest release, Live
at Club Helsinki (2017), as well as numerous other Club d'Elf albums.
In addition to some surprise guests, long-time "core" member DJ Mister
Rourke will add his surreal and psychedelic sounds to the mix.

The band's music has been called "the music of dreams" by the Boston
Globe, and draws from a startlingly wide spectrum of styles, including
jazz, Moroccan Gnawa, hip hop, psychedelia, electronica, avant garde
and dub. Circling about bassist/composer Rivard and drummer Dean
Johnston is an ever-changing constellation of some of the most
creative improvisors from the jazz, DJ, rock & world music scenes of
Boston and NYC, as well as international guests. Each Club d'Elf
performance features a different line-up, creating a unique experience
for audience and musicians alike.

"One of the most inventive and ever-changing bands in all of new jazz"
- Russ Davis, Jazz America